Brands Leading the Evolution of Boating

One of the oldest forms of transportation, industry and entertainment, boats have been around since ancient times—dating as far back as 8000 BC. And while the motivations for boating remain similar today, the boating industry continues to evolve rapidly alongside the tech boom driven by the digital age. As a record number of boating companies battle for market share as the market and consumer continue to change, each brand offers its own value proposition: classic styling, high safety ratings, beautiful design, comfortable ride, and so on. But in this feature we’re going to focus on a few brands setting themselves apart by bringing new innovation to boating today and beyond. 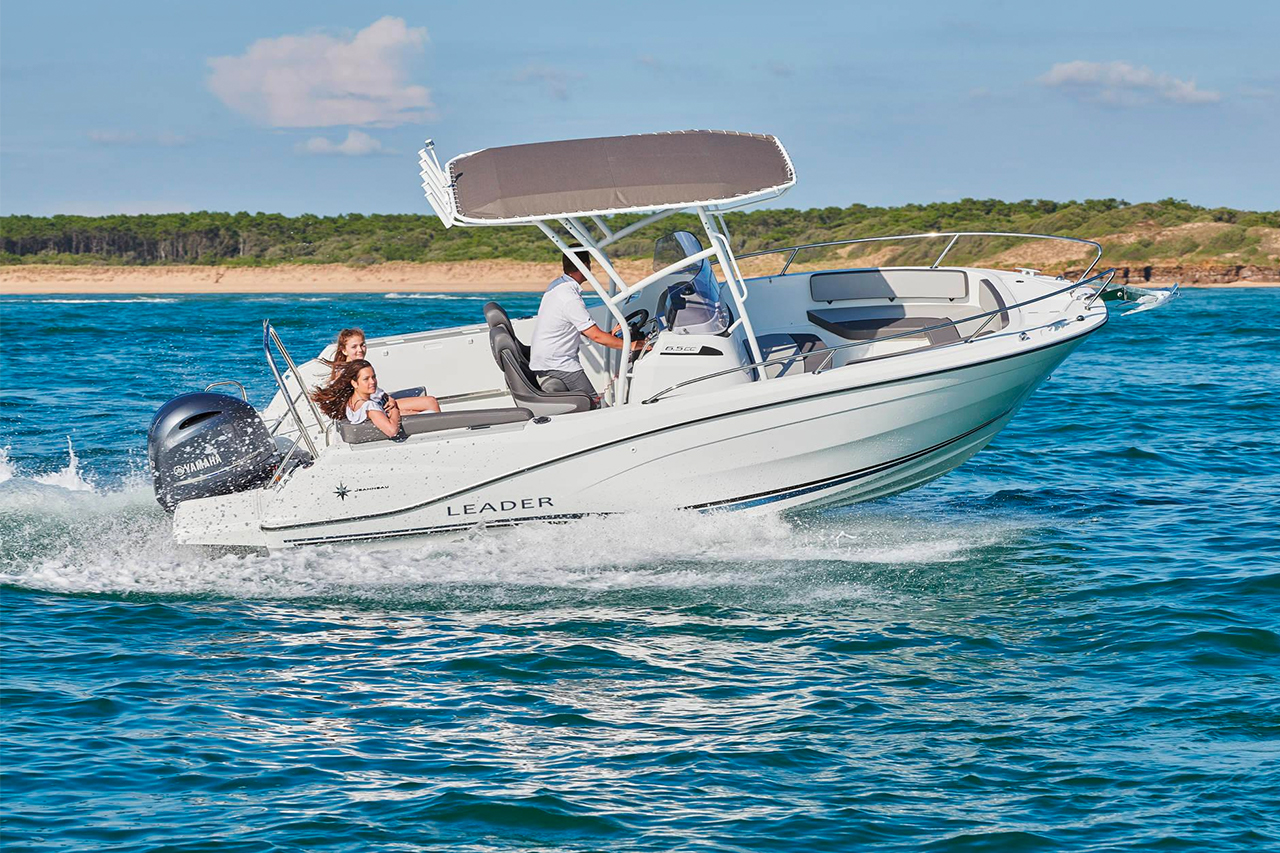 Jeanneau pioneered the modern docking experience, and it’s not stopping there.

What could complement weekend pleasure cruising any better than simplifying the docking experience?

Known for being an early pioneer of the joystick, Jeanneau developed hulls for inboard power boats compatible with the joystick, and eventually sterndrive, changing the docking game entirely. They even introduced 360-degree docking to some of their sailboat models: with a joystick, the boat can be directed by a pivoting sail drive, coupled with the engine, that rotates a full 360 degrees while working in tandem with the bowthruster and keeping the rudder steady. Today Jeanneau’s team of 130 engineers continues to advance its technologies with easy handling and docking its beacon for development, aiming next at its outboard models, leveraging state-of-the-art design programs.

And the innovation doesn’t stop at the stick. Jeanneau’s weekend cruisers are known for being stylish—elegant, even—and feature cutting-edge tech and features, while offering also the comfort and practicality leisure boaters seek. Possibilities for weekend family outings are enhanced with innovative layouts that keep everyone onboard comfortable, for longer: Jeanneau boats feature ample space, enlarged windows, extended aft swim platforms, and a generous range of technology to support whatever activity you choose to focus on that week. 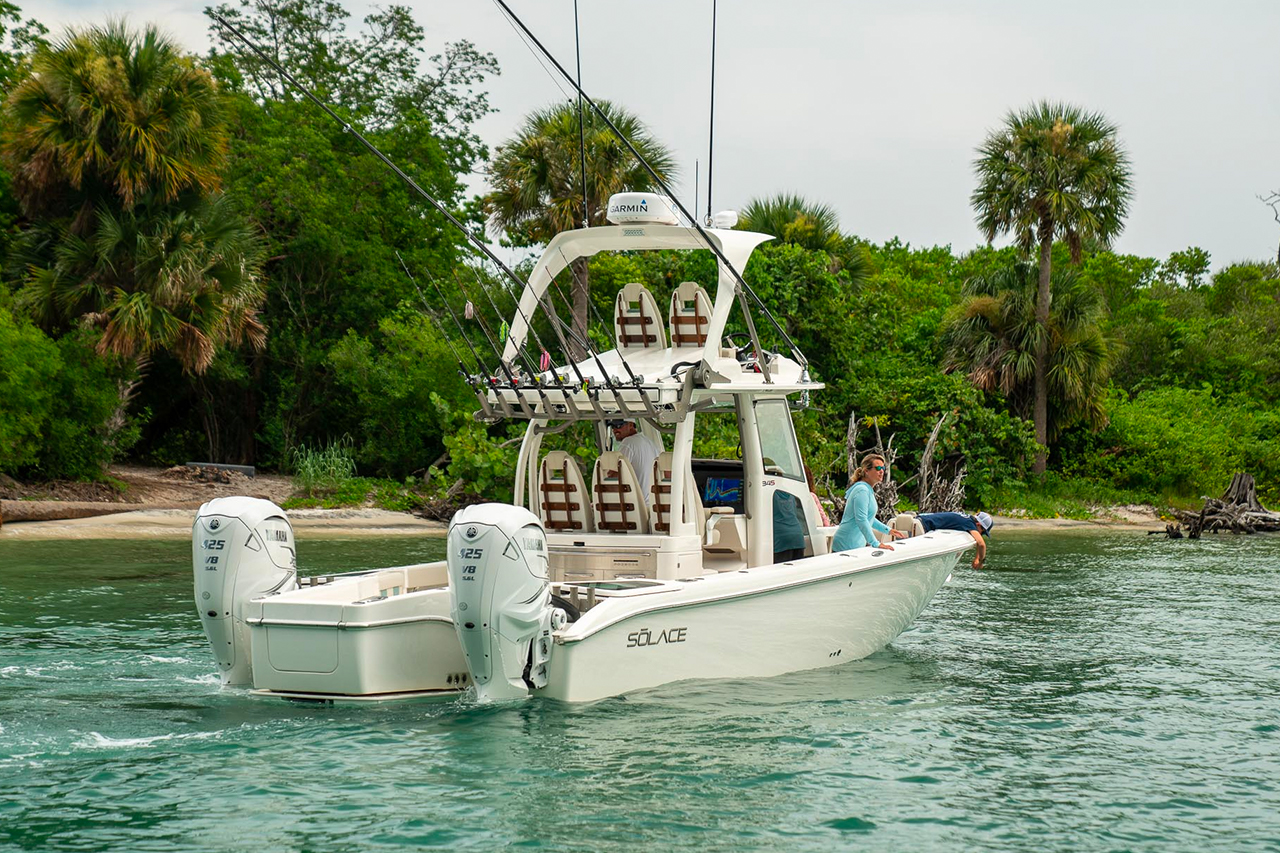 A SOLACE CENTER CONSOLE IS AS GROUNDBREAKING IN THE FINEST DETAILS AS IT IS IN THE GRAND ONES.

A newcomer brand brought to you from a boat innovation pioneer, evident at first sight of one of their center consoles.

Founded by boating veteran legend Stephen Dougherty architect of Boston Whaler’s rise to fame, later founder of EdgeWater, and then, Everglades boats, this latest brand run by him and his wife pushes the limits through future-looking design and engineering, superfine attention to detail, and standardization of a host of features woven throughout each of their models. In short, the brand warrants all the attention and awards its captured since its launch in 2019, crushing the skepticism that so often surfaces at times of disruption.

Currently offering two center console fishers, Sōlace introduces breakthrough innovation in its two models: most notably the “fish-through” transom—which, as it sounds, adds space to the cockpit, allowing you four feet of space to fish safely around the propellers. How about the hydraulic, retractable swim platform, also a feature of the 345 model. The brand also leverages magnet technology to affix features in place, and the cockpits are striking, resembling that of an airplane. This doesn’t scratch the surface of the finest and cleverest of details, the latest Garmin technologies, and plenty of other surprises. Lest you think these boats focus too much on flash, they ride comfortably and like boats much larger than their size. If you’re driven by innovation, you must take one for a sea trial—if you can find one for sale.

Sōlace founder’s former company Everglades remains also a leader of driving cutting-edge fishing boat technology. The brand, known for its distinct visual lines, patented features and top quality reflect Dougherty’s philosophy of “Intelligence by Design,” starting with its groundbreaking approach to unsinkable hull building that leverages a thicker foundation of fiberglass and patented structural foam poured into precisely engineered molds vacuum sealed and bonded. They also utilize gyroscopic stabilization to reduce roll. Rounding out the build and the ride are impeccable finishes and groundbreaking features to elevate their models even further, locking in their target of status-seeking boat buyers.

One of the goals for Everglades is to bring a yacht-like experience to center consoles. The 395, launched in 2019, broke new ground as it truly blended luxury for those aboard for a day trip with the creature comforts necessary to host a crew comfortably for offshore trips a couple times a month. The boat offers both sophistication and sportiness—it’s a tough fisher offering the best offshore fishing technology progression, but inside it’s spacious and luxurious, pleasing both anglers and cruisers the same.

One of the goals for Everglades is to bring a yacht-like experience to center consoles.

Tech-hungry early adopters seeking luxury and progression, get your search on.

This article only touches the surface of boating industry innovation that brands like Solace, Everglades, Jeanneau and their competitors have to offer, and we don’t expect the envelope-pushing to stop. With the boat market getting younger, more tech-savvy and with the greater flexibility people are having with their work schedule and location, industry thought-leaders and engineers will continue to push the limits of power, tech and luxury well into the future.