These Three Used Boat Types Are Most in Demand

We have been telling you how hot the used boat market is right now. You’ve likely read about how yacht charters rose so high in popularity during the pandemic that people started buying their own yachts, leading to a yacht shortage. But the highest rise in recent boat sales has come from first-time boat buyers. And their entrance into the market have caused certain types—all powerboats, by the way—to rise even higher in demand. If your boat is on this list, the time is right at the end of season to sell it for top dollar and order your next boat. If you’re a first-time buyer, read more about these three entry-level boat types before you start searching. Freshwater fishing boats are always one of the most popular first-time boats, but they are in even more demand right now

Affordable and easy to navigate, freshwater fishers are a great entry to boating life.

Freshwater fishing boats account for about a third of all registered boats in the US and it makes sense—fishing is one of the most popular outdoor activities in America. Offering a balance of family fun and an opportunity to soak in nature’s elements, fishing and handling a fishing boat are both easy to learn. These boats provide storage and space for rods, baiting stations and livewells (built-in fish storage). Depending on the size and make of your fishing boat, you’ll find these and more features supporting you on your fishing excursions. Knowing family is usually aboard, fishing boat manufacturers also place a focus on family safety and comfort features, for those times you don’t have a line in the water.

Since they’re so popular, of course there are a long list of fishing boats to set out on the water. A few types of freshwater fishing boats include bass boats, bay boats, flats, center consoles and deck boats. Of course this means there’s a range of price points, too. Basic fishing boats are among the most affordable boats out there, with inflatable and aluminum styles generally the least expensive. Best in calm waters, these boats most often use an outboard engine that’s often steerable by hand. When you get into deck boats, bay boats and hybrid fish-and-ski style boats, there are a lot more shapes, sizes and engines to choose from, with many of these able to cross over into saltwater as well. Search for your first fishing boat and get started on the path to Instant Boatification™. 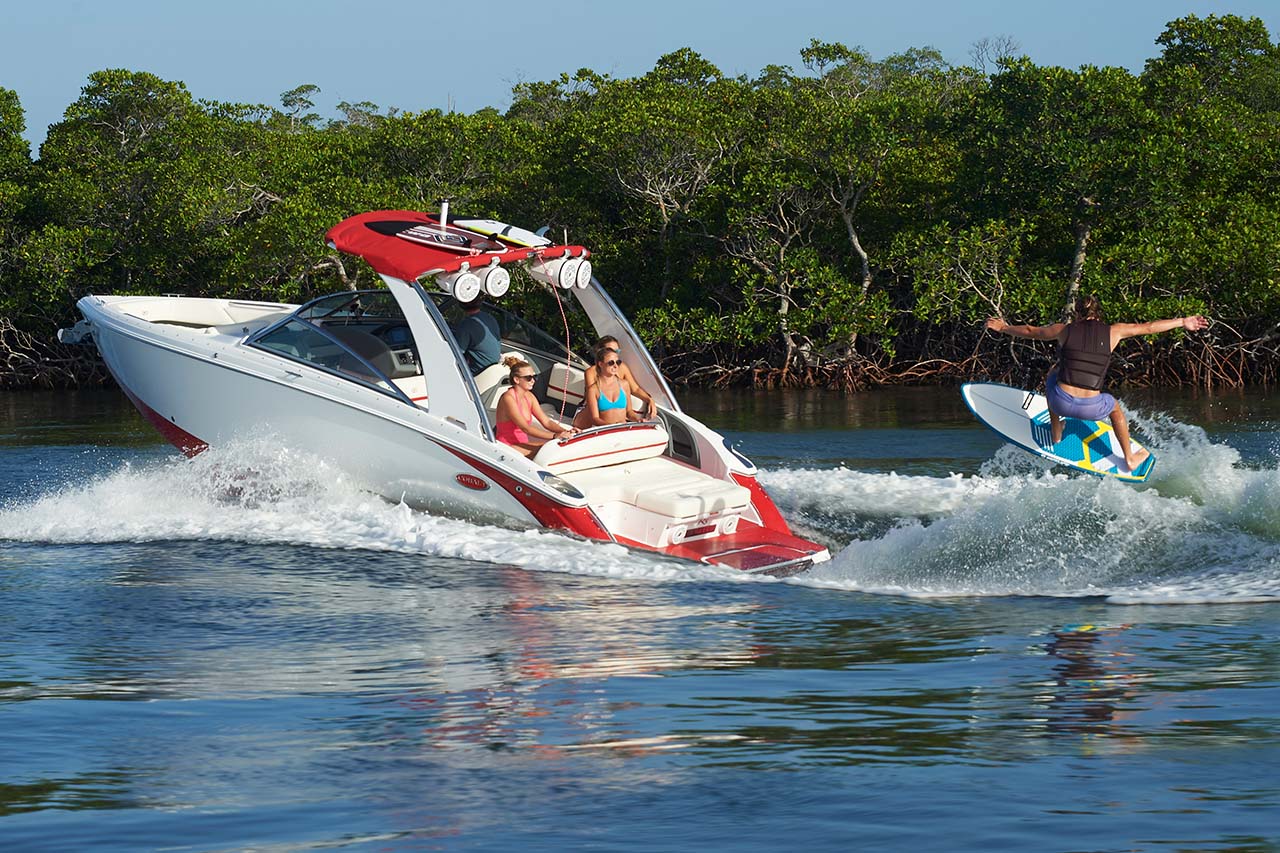 Wakeboarding boats, like this [Cobalt R5 Surf] are fun for adrenaline junkies and spectators alike.

Wake boats are easy to spot in the water. They’re fast, the music is loud, and, well, they’re often towing someone behind the boat.

Even when not towing anyone, wake boats, used for wakeboarding, waterskiing, wake surfing and towing inflatable ride-on toys are easy to spot in the water by their wake towers. Usually ranging in the 20 to 24 foot range, wake boats most often use a V-Drive system, powered by an inbound motor with the engine placed backwards toward the rear of the boat, which is the main generator of the large wake, though less-expensive sterndrive wake boats are also rising in popularity. (Other features like a ballast, the hull shape and/or hydrofoil combine to perfect the wake shape and direction). They’re also designed to maximize seating for spectators and those “on deck” to catch the next wake.

Since 2019, Wake boats have risen in sales by 20%, and dealers say that number would be even higher if there were more inventory. Some of the major wake boat manufacturers include Malibu, NXT, Moomba, Mastercraft, Nautique and Chapparal, to name only a few. While wakeboat technology and power set initial pricetags higher than a lot of other entry-level powerboats, buying one used is a great opportunity. Search for wakeboats right now near you. 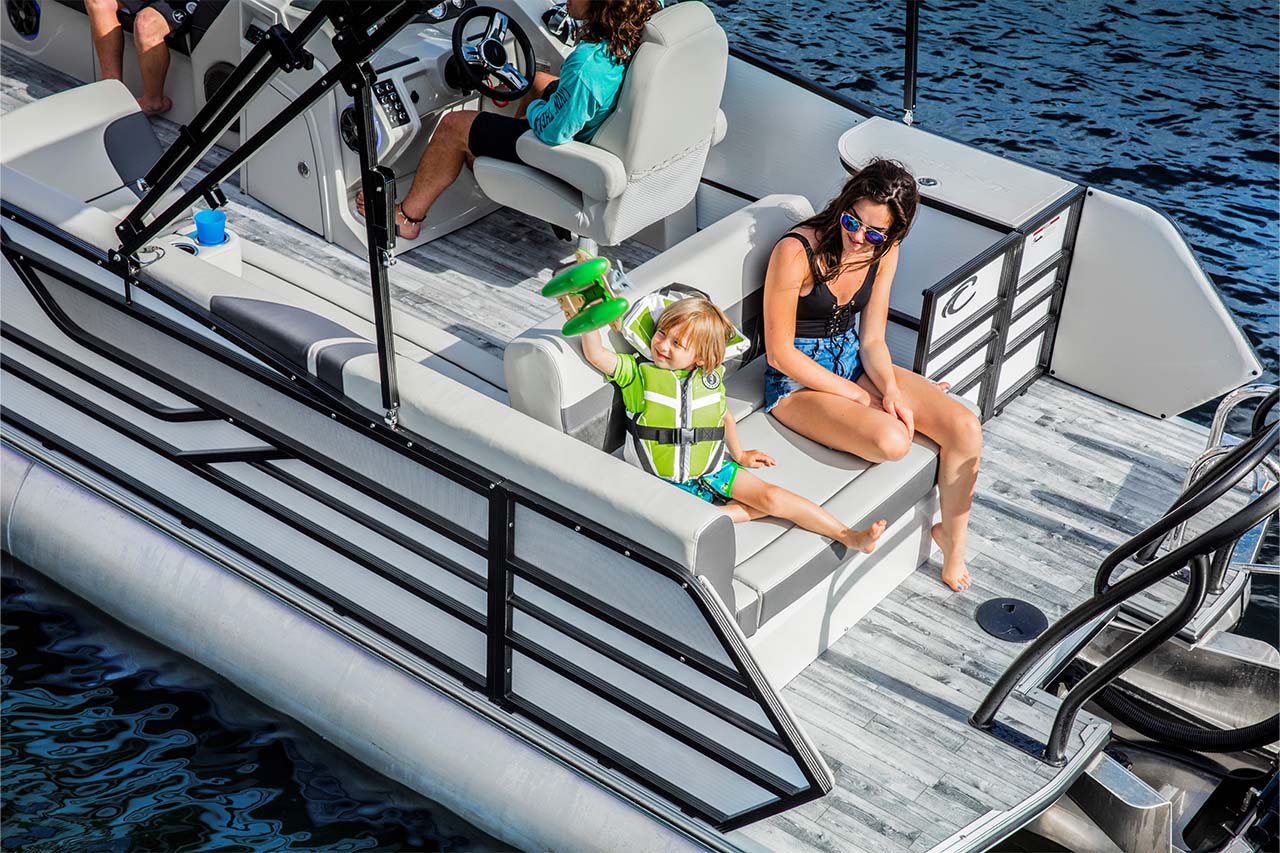 PONTOON BOATS ARE PERFECT FOR ENTERTAINING, EASY TO NAVIGATE AND EASY TO DOCK

Steady and smooth in the water, pontoons are designed for pleasure cruising and entertaining, but some can do a lot more.

Pontoon and freshwater fishing boats combined for half of last year’s powerboat sales! Like fishing boats, pontoons have a learning curve that’s conducive to first-time boat buyers. And you can even fish off them. Pontoons are most known for their shape and stability on the water. A flat boat positioned on two floating pontoon “tubes,”  pontoon boats offer ample deck space for dining, sunning and lounging around. They also remain shallow beneath the water, often only about eight inches, which makes them risk-averse to underwater damage, easy to dock, and a breeze to drop off and pick up your passengers.

The rising popularity of pontoon boats has generated a long list of manufacturers that specialize in all kinds of pontoons, from affordability-focused, to luxury models, with some even suited for watersports towing.  Whatever your budget as a first-time boat buyer, there is likely a pontoon suited to your needs. One of the most popular boat types on Boats For Sale, we have hundreds of pontoons available. Begin your search now.